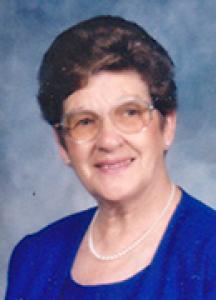 RAMSEY: Lucy. After a life well lived, Lucy passed away July 5, 2022 at the Souris Health Center with her husband Ron and Grandson Scott at her side. Lucy Annie Margaret Blanchard was born February 18, 1930 at her parent's farm NE 13-07-24 RM of Sifton. She attended school in Deleau where many lifelong friendships were formed. In 1948, while working as a telephone operator for MTS in Hartney, Lucy met Ron Ramsey. They were married June 28, 1950. A week before her passing, they celebrated 72 years of marriage. After several moves, they settled on the farm of Lucy's parents. It was here that they raised their children and worked tirelessly together. In 1990 the farm was sold. Lucy and Ron moved to Hartney, followed by a move to Victoria Park Lodge in Souris. Together, Lucy and Ron continued to cherish visits, phone calls and enjoyed an active social life. Lucy had many loves, knitting, gardening, baking, curling, baseball, square dancing and playing cards. Her greatest loves were her husband, children, grand and great grandchildren. Lucy was predeceased by her son Allan, her parents Rene and Isabel Blanchard, her brother Don, and her parents-in-law John and Belle Ramsey. Lucy is survived by her beloved husband Ron, son Jim (Linda), daughter Cathy Cowan (Doug) and son Doug (Jodi), many treasured grandchildren and great-grandchildren. She is also survived by her sister Bev Lyons, sister-in-law Eleanor Blanchard and nieces and nephews whom she loved dearly. Funeral service for Lucy was held on Saturday July 9th, 2022 at the Hartney Centennial Center. Internment of ashes will take place at Lauder Cemetery at a later date. "I am leaving you with a gift - peace of mind and heart." John 14:27

Messages of condolences may be made at www.kowalchuks.net