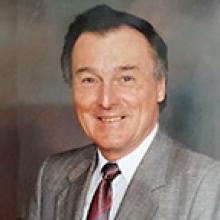 
After suffering a stroke and failing health, Ed passed away peacefully July 16, 2022.
Ed is survived by his wife Diane, daughter Maureen (Bob) Mackey, stepdaughter Debbie (Chris) Lillies, sisters, Jessie Gordon and Sheila (Henry) Riendeau, grandchildren, Simone (Jeremy) Duff, John Kutz (Cholena), Callum McLean, Leah (Bryan) Koroscil and Kaylee Bolonchuk; great-grandchildren, Braedon, Avery, Bentley and Kenna and several nieces, nephews and cousins. Ed was predeceased by daughter Dawn Kutz, parents, Jessie and Bruce McLean, brothers, Neil and Alan.
Ed was born on a brutally cold January day the third of five children. He received his education in a small, rural one room school with a single teacher. For him it was a great way to learn as he could glean ideas and information from the upper grades, and there was a good library. After graduating, he took, what he thought was a temporary position with Bank of Montreal (BMO) in Brandon, MB. It became his career and it was a fulfilling. Ed worked in Human Resources, then as Training Officer, a Divisional Personnel Manager for Manitoba, Saskatchewan, NW Ontario and a Branch Manager retiring in Senior Management after 40 years. Oh yes, he did continue working part-time with BMO but only if it didn't conflict with his golf games and other activities; like travelling with Diane. With good health, Ed went on to taking courses at University of Calgary, not to obtain a degree, but to enjoy the things in life that fascinated him, anthropology, paleontology, creative writing, fiction writing and psychology. Throughout those years he was an active participant in curling, tennis and golf...yes, he had a few holes-in-one...six to be exact! But he learned after the first one - don't have it at a tournament as the bar bill-gets very expensive. He didn't have hole-in-one insurance, but he thought about it. He was proud the year he turned 76 and scored a 76.
In November 1971, he was invited to join Rotary in Sudbury, ON and continued with Rotary in Calgary and St. Vital Rotary Club in Winnipeg. His 29 active years in Calgary were with Chinook Rotary Club where he volunteered with Spruce Meadows raising funds for numerous projects assisting those in need. In Ed's earlier years he served on the Chamber of Commerce in Sudbury, Thunder Bay and Winnipeg. He assisted with the United Way in several cities and saw the good it does for so many organizations. Ed was a volunteer with Meals on Wheels, and Calgary Senior Resource Centre.
Ed always said "I've had a good life and a healthy retirement and Diane and I were able to enjoy many places in the world. We travelled to several European countries, the British Isles, Australia, New Zealand, the Caribbean and Hawaii and of course visited several warmer USA locations with our many good friends throughout the years."
Thank you to St. Norbert Personal Care Home for their compassionate care provided to Ed these past few years.
In keeping with Ed's wishes cremation has taken place and there will be no service.
In lieu of flowers, donations may be made in Ed's memory to Heart and Stroke or to your charity of choice.
To view or share photos, condolences and memories of Ed please visit www.ThompsonInThePark.com


When someone you treasure becomes a memory.......their memory becomes your treasure.
THOMSON "IN THE PARK"
204-925-1120
Condolences may be sent to
www.thomsoninthepark.com