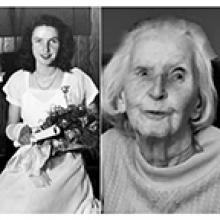 
It is with great sorrow that the family of Thelma announces her passing on July 18, 2022 at the St. Boniface Hospital at the age of 92.
She will be lovingly remembered by her husband Laurie (Mike); her children, Lynda (Bill), Andy, and Angus; her daughter-in-law Jacqui; her grandchildren, Dylan, Kylie (Matt), Katy, Riley, Ashlee and Jason (Attyah); and her great-grandchild Walker.
She was predeceased by her son Tim, her sister Hazel and brother Fred.
Thelma was born October 15, 1929 to Clifford and Pearl Earl at the family farm in Swan Lake, Manitoba. She was home schooled until age seven and then attended school in Swan Lake, finishing grade 12 at the Bruxelles Convent. She attended the Success Business College in Winnipeg and worked as a stenographer for the National Trust Company and then at the T. Eaton Company in the sales office. In the summer of 1950 Thelma and Mike were attendants at her sister's (Hazel) and his brother's (Pat) wedding and their courtship began. They were married on July 24, 1954. She worked as a secretary at the Blue Cross until they started a family. They have resided in their Fort Garry home(s) since 1958.
Thelma was a stay at home mom and home maker. In addition to looking after her children, she was kept busy cooking, sewing, knitting, and gardening. She always had hot meals on the table and was a wonderful baker, especially her pies. Thelma had a love for music playing the piano and singing in the Swan Lake and Windermere United church choirs. She also participated in the Outreach group helping those less fortunate. Her pastimes were reading, crosswords and watching baseball and curling on TV.
As her mind was still sharp, she kept up on current affairs and was still a great conversationalist right up until her passing. Her greatest joy was the time spent with her family and keeping appraised of the goings on in her children's and grandchildren's lives.
We were lucky to have such a loving and devoted wife and mother always putting our needs ahead of her own. Even at the end she would say "Don't worry about me, just take care of each other". She will be deeply missed by all of us but now is in a better place free of pain.
A special thanks to the Seven Oaks Hospital and The Convalescent Home for the care they provided over the past seven months.
According to her wishes, cremation has taken place. A private graveside service will take place at a later date.
In lieu of flowers, donations may be made to the Dasch Foundation.


THOMSON "IN THE PARK"
204-925-1120
Obituary may also be viewed and
condolences may be sent to
www.thomsoninthepark.com