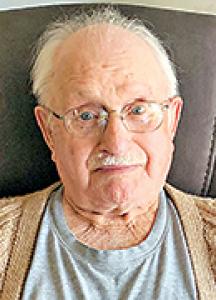 McLEOD: Jack McLeod, age 95 years, passed away on Tuesday, September 6, 2022, surrounded by family. Jack was born September 3, 1927, at the McLeod Farm on #3 Highway just east of Mather, MB. He was the youngest of four boys and father of four children. He met his beloved wife, Dona Howell while she was teaching at Aberdeen School. Jack's life was hard as a young boy, his father passed when he was turning six years old, and his father's funeral was held on his sixth Birthday. By nine he was working in the fields driving four horses on a two-furrow plow. When his mother remarried, he moved with her south and east of Crystal City, he didn't go back to school, never finishing Grade eight. Jack did a man's work starting at the age of 14 on the farm from 1942 to 1953 with his mom and Ed. He would drive six horses and his father-in-law would drive six head. During this time Dona Howell (Deceased 2015) came to be the teacher at Aberdeen School which was half a mile from the farm Jack was living at. Jack and Dona married in 1950 and Neil was born in 1951, in 1953 they moved to the Bale Farmstead where Jack's mother had been born and he operated the farm at Mather, MB. While living and working on that farm Bev, Michelle and Don were born. When living on that farm at Mather, Jack was on the School Board for Mount Prospect, the United Church Board and was a 4-H leader. Jack brought his family to Brandon in 1966 and quickly was involved in the new community by being on the Central United Church Board along with helping start the Wheat City Riders 4-H Club. In 1974, he bought his share in the Provincial Exhibition, # 800. Jack was Vice President of the Provincial Ex in 1987 and 1988, President in 1989 and 1990, and he was president of the Keystone Board from 1997 to 1999. He was an avid Curler and Golfer. Jack joined the Masons at Cartwright in 1960 and Brandon Shrine Car Patrol after moving to Brandon. After moving to Brandon Jack attended ACC and took his upgrading and then the plumbing program. After a few months of not really taking to plumbing he worked with his brother Angus at McLeod Cartage until they started Plains Industries, which later became Trail King building gooseneck trailers. This worked into a multifaceted trailer manufacturing and repair shop until they retired in 1987. It is known as Millco Steel. Jack then became a permanent fixture at Thunderbird Horse Centre where he spent hours on the mowers and repairing equipment, cleaning pens and keeping busy. But he always had time to stop and have a coffee, visit, catch up on what was going on in the community with friends, family and visitors at Thunderbird. Jack leaves behind: son Neil (Kathy) and granddaughter Sharra; daughter Bev McLeod; daughter Michelle (Tim) Lockridge, granddaughter Katelyn (Michael) Gough, great-grandchildren: Cillian, Finn and Gunnar Gough, grandson Clayton Lockridge (Megan McGregor); son Don (Lorri) McLeod, grandson Tyrel and granddaughter Paige (Dylan McPherson). Jack was a loving husband, father, grandfather, great-grand father and friend. The Celebration of Jack's Life will take place at the Dome Building, 1200 – 13th Street (Keystone Centre Grounds, East side) on Wednesday, September 14, 2022 at 1:00 p.m. For those not able to attend in person, the Celebration of Jack's Life will be webcast on his memorial page at www.memorieschapel.com. Donations in memory of Jack may be made to the Provincial Exhibition of Manitoba, – Dome Fund, Unit 1A – 1200 13th St. Brandon, MB, R7A 4S8.