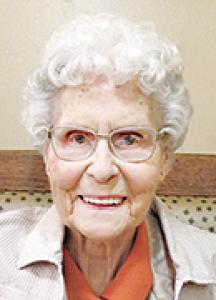 REID: Irene Reid, age 95 years, beloved wife of the late Cecil "Pat" Reid and mother to Louanne and Lane Reid, passed away peacefully on Saturday, November 12, 2022, at her residence, Fairview Personal Care Home. Irene, born April 3, 1927, was the first child and only daughter of Ben and Eliza Gray. Her brothers, Dan and Ben, were both born on July 1, in the years 1930 and 1935, respectively. The Grays farmed in the Ewart and Bardal School Districts and faced many hardships in the 1930s. Irene attended school in Bardal, often boarding at other residences as their farm was too far from the school. Eliza passed away when Irene was only 12 years old. Irene accepted the responsibilities of cook, baker, cleaner, seamstress, farm hand and big sister to her younger brothers. The family lived on several different farms before settling in the Sinclair area in 1945. Following a courtship which included Pat driving his W6 tractor (with his homemade cab) across the winter landscape, Pat and Irene were married in Reston, Manitoba on April 12, 1950, a marriage that spanned over 57 years. Pat and Irene's first home was a homemade trailer that they moved to Sinclair for the winter months and to the farm for the summer. Eventually, Pat built a one-bedroom home on the farm site, in time for the arrival of daughter, Louanne in 1953, followed by Lane in 1955. In 1961 an addition of two bedrooms and a large bathroom/laundry room were completed. Everyone was excited to get waterworks, especially Irene! There are many fond memories of Irene's time as a homemaker, gardener and helper on the farm. The smell of fresh baked bread when Louanne and Lane walked into the house after a long day at school is a memory that will never fade. Irene also baked pies, often referred to as "foreign objects" by her family, as their excitement of fresh pie for dessert was shattered many a time when they found out the pie was for a fall supper or bake sale. In 1973, the family sold the farm and moved to Virden and eventually into the house that Pat built at 236 Bennett Crescent. It was a large home, and soon became known as "Reid's Motel" as it was a gathering place for their out-of-town visitors. When the Eaton's or Simpsons-Sears catalogues arrived, shoes was always the first section to which she turned; therefore, when her first job outside of the home was at Virden Footwear, it was a great fit! She loved the experience and knowledge she gained, knowledge she continued to pass on to her family. If you had new shoes she would ask if they were wide enough and make sure the fit was correct. Even as a resident in Fairview she would give Lane and Louanne VERY specific instructions on the shoes they needed to buy for her. After retiring from the workforce, she joined Pat as a volunteer at the Virden Lions Park Campground. Pat looked after the grounds and Irene handled reservations and camping fees. They loved the opportunity to meet travelers from all over and to hear their stories. The family enjoyed spending the summers camping in their tent and later, their Scamper trailer, at Kenosee or Oak Lake with many trips to British Columbia. Pat and Irene both participated in square and round dance clubs. Irene became a round dance teacher and organized Sinclair's first round dance club. When they moved to Virden, Irene's new interest became auctions and yard sales and searching for the latest hidden treasure. Irene was a member of the United Church of Canada, the Bardal Women's Institute and the United Church Women (in Bardal, Sinclair and Virden). Irene travelled to the Holy Land, Alaska, the East Coast and Branson, Missouri and in the late 1980s, spent a few winters in Arizona with Pat. In 2006, when Pat became a resident of Rideau Park Personal Care Home in Brandon, the house in Virden was sold and Irene moved to Brandon, first to Colonial Estates and then in 2008 to Lions Manor. Irene enjoyed her time at Lions Manor where she was involved in the Kitchen Band playing the kazoo and tea pot, as well as helping at Christmas to decorate "her street" on the Second Floor. She looked forward to pancake breakfasts, the monthly suppers, and Wednesday lunches catered by Shady Lane. After a fall at home in late April 2021, Irene was unable to return to her residence at Lions Manor and moved to Fairview Personal Care Home. There, Irene tried to maintain as much independence as possible and kept her living space in an orderly fashion--a place for everything and everything in its place. When Irene was asked, "If you could live anywhere, where would you live?" her response was, "the farm". She loved the animals, the wide-open spaces, the quiet, the closeness to nature with its sounds, smells and the changing of the seasons. You can take a girl out of the country, but you can't take the country out of the girl! Irene is survived by daughter Louanne, son Lane (Colleen), grandchildren Carrie (Wade) Sauve, Chris (Leann) McCannel, and great-grandchildren Emilie and Parker Sauve and Carter and Brock McCannel, brother Ben (Rosita) Gray, sister-in-law Kay Reid and many cousins, nieces and nephews. Irene was predeceased by her parents Ben and Eliza Gray, husband Cecil "Pat" Reid, brother Dan (Mabel) and other extended family members. The Celebration of Irene's Life will be held at a later date with interment at Sinclair Cemetery. Donations in memory of Irene may be made to the Brandon Regional Health Centre Foundation, 150 McTavish Avenue East, Brandon, MB R7A 2B3 or a charity of choice.