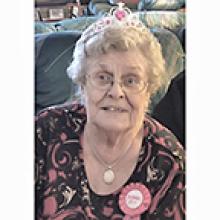 
With profound sadness we announce the passing of Rose Patricia Bodnarus on Tuesday, November 22, 2022 at St. Boniface Hospital.
She leaves to mourn her sister Eugenia (Dave), brother Melvin, and sister-in-law Mary Ann. She is also survived by seven nieces, five nephews, seven great-nieces and eight great-nephews. She was predeceased by her parents Peter and Pauline (Shyk) Bodnarus, her brothers Adam and Walter, her sisters Mary (Walter), Gladys and sisters-in-law Violet and Ruth.
Rose was born at the Hunter Memorial Hospital in Teulon on February 28, 1940, the fourth child and second daughter in a family of seven. She attended grades one through ten in Komarno, MB, and grades 11-12 at Teulon Collegiate. She graduated as a Licensed Practical Nurse in 1961, from the Manitoba Institute of Technology and Misericordia Hospital and was awarded the Canadian Nurse Award of Merit in Nursing. While assisting doctors as an operating nurse at the Misericordia Hospital, her skills and compassionate nature were noticed by a few doctors looking for a nurse to join their private practice. Thus, began her 32-year career at McGregor Medical. She was truly meant to be a nurse, as she had a sincere and caring heart for everyone. Rose was fluent in Ukrainian, which was a definite asset in terms of her patient care, however it was her warm and nurturing disposition that allowed her to forge relationships and bonds with all her patients, including many family members. From 1996 until retiring in 2005, Rose provided private nursing medical care through Medox Health Services.
Family was very important to Rose. She was actively engaged with all of her siblings and their families, helping in any way possible. She travelled extensively with her sisters throughout Canada and abroad. The last year and a half, Rose was able to spend quality time with her sister Gladys, and create lasting wonderful memories for us all. She was also an enthusiastic participant in all of her niece's and nephew's upbringing, which carried into their family's upbringing as well; being interested in all their activities, events and fundraisers, and being present to lend an ear when needed.
In accordance with Rose's wishes, a private family celebration of life was held. Flowers gratefully declined, donations can be made in her memory to a charity of your choice.