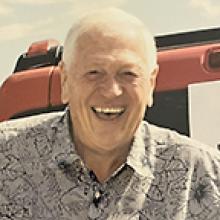 
Charles Herbert Brown (Chuck), 81, of Salmon Arm, BC, passed away quietly in his sleep, Tuesday morning, November 22, 2022, after a lengthy battle with Parkinson's disease.
Chuck was born in 1941 to the late Carl and Ethel (Morris) Brown in Flin Flon, Manitoba. Chuck is lovingly remembered by his wife, Donalda (Fancy); his three children: Lori (Paul) Standing, Carl (Cheryl Melosky), and Douglas; five grandchildren: Leah, Blaine, Amy, Oliver, and Sebastian; and extended family, friends, and pets.
Rarely one to back down from a good time, Chuck enjoyed the small-town life and company of good friends in Flin Flon while he was growing up, most notably his lifetime friend Den Ballard. Eventually, ambition got a grip on him and Chuck decided to contribute his talents to higher education. Somehow this appealed to Chuck, and he made a career for himself as an accomplished and respected actuary at insurance companies in North America and Jamaica. He also spent a few enjoyable years as a Professor at the University of Manitoba.
Chuck enjoyed many other activities throughout various stages of his life: travel, flying small airplanes, curling, singing/dancing to Elvis, trying to golf and many fun years spent getting into trouble with Donna and Larry Fancy. His favourite activity was fishing. Whether it was a sunny day on a calm lake, or a cold windy day on a rough ocean, Chuck could spend all day out in a boat, with a fishing rod at the ready. Most of the pictures in his home office are of one fishing trip or other, usually of Chuck holding one of his trophy catches.
Chuck approached most of his endeavours (education, work, hobbies, family-life) with the same calm, organized dedication - the man could load a dishwasher like nobody else! Probably the best example of his devotion to a task occurred when a friend asked Chuck to keep an eye on his girlfriend while he was away. Chuck kept both eyes on that girl for the rest of his life including 59 years of marriage.
People that know Chuck well, and many complete strangers were drawn to his engaging charm and humour. Even the nurses at the hospital grew accustomed to his warm smile, despite how he was really feeling. He will be missed and remembered.
The family will be holding a celebration of his life at a later date.


To leave an online message of condolence, please visit www.bowersfuneralservice.com