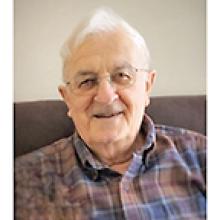 
It is with heavy hearts that we announce the sudden passing of our Dad and Grandad George Bouchard on November 29, 2022, at the age of 88.
George was predeceased by his loving wife Patricia of 62 years. Left to mourn and celebrate his life are his children, Michelle Fitzmaurice (Ken), Janet Williams (Terry) and George Jr. (Carla); grandchildren, Tyler (Melanie), Rhys, Kelly (Bec), Kyla, Jesse (Becky), Danae, and Jordanne; great-grandchildren, Lou, Sully, Lincoln, Leo, Zoe and Jasper; his younger sister Sally; sisters-in-law, Marie (Rheal) and Pauline (Marcel); and many more family and friends.
George was one of twelve children, raised on the family farm in Elie, Manitoba. Dad often shared memories of life on the farm, and would talk about how his siblings always looked out for him and how they were always there when he needed them. They always remained close between phone calls and visits. George embraced the Langevin side of the family with equal love and affection. All family gatherings were filled with love, laughter, and many memorable moments.
George left school in Grade 9 to work on the farm. His first job in Winnipeg was at Carter Motors, and then he spent a few years working on the Ships shovelling coal throughout the Great Lakes, and a few more on the CNR bridge building gang before settling in the North where he worked for TransAir for over 10 years. During that time he obtained his certification as an aircraft mechanic.
George met the love of his life Patricia at a family party in Winnipeg. They were married in 1957 in Lynn Lake after Pat went for a visit and they knew they were meant to be together. Their family grew with the addition of Michelle and Janet, where they enjoyed many years in Lynn Lake and The Pas. Dad embraced the North and all it had to offer and perhaps most of all the camaraderie and the sense of community he felt from everyone. In 1967, they moved their family to Winnipeg to buy DeGagne Motors in St. Boniface, eventually expanding with Voyageur Auto Leasing. While in Winnipeg, they enjoyed all the benefits of being closer to extended family. With the birth of their son George Jr. in 1974 they delighted in many new adventures. They enjoyed retrofitting and camping in the converted school bus and several years at the Ochre Beach cottage, where they connected with cousins and made many unforgettable memories.
In 1981, they built a cottage in Buffalo Point where they made many new friends and continued their family connections. In 2000 Buffalo Point became home; Dad, always the ambassador, would promote this beautiful lake country at every opportunity. He taught everyone to fish and embrace lake life. George enjoyed organizing the annual Cottage Owners' Fishing Derby featuring Pat's famous chili. They were definitely a team and were recognized with a Volunteer Appreciation Award for their many years of community service at Buffalo Point.
George and Pat shared a deep belief in their Roman Catholic faith. Their service and fellowship with the St. Francis Mission Group spanned over 50 years. After Pat's passing, George expanded his community service by volunteering at Siloam Mission and later the St. Mary's Food Bank. He was a great storyteller, an avid hunter and fisherman, he enjoyed the many building and reno projects that Pat would envision, he was an avid Jets supporter, and he had the best stocked woodpile in Buffalo Point. George supported many different charities and he was very proud of his 103 blood donations. George was also known to enjoy an occasional trip to the casino.
We will be forever grateful that until recently he was able to enjoy a long and healthy life. He loved to host family gatherings at his home as recently as the last Grey Cup. All children held a very special place in his heart. Whether it was his grandkids, great-grandkids, who were the center of his universe, great nieces and nephews or the children that visited on his street, they all brought him the most incredible joy. There was always a bag of treats ready for each of them. Thank you for all the lessons you taught us - we were listening.
Many thanks to Dr. Daeninck and the entire team at the Victoria CancerCare Unit. George felt very well cared for. Thank you also to Dr. Scott-Herridge and Dr. Cox.
In lieu of flowers, if family or friends so desire, a donation may be made directly to St. Mary's Road Foodbank or through https://www.canadahelps.org for a tax receipt, Centre Flavie Laurent or Oyate Tipi Cumini Yape.
The Funeral Mass will be celebrated at 11:00 a.m. on Friday, December 16, 2022, at the R.C. Parish of St. Timothy, 135 John Forsyth Rd., Winnipeg, MB.