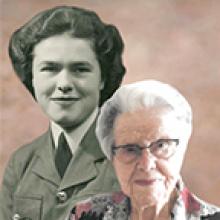 It is with great sadness that we announce the passing of Emma on December 30, 2022 at the age of 103.
Born in Rotherham, Yorkshire, England on May 12, 1919 to John and Hannah Jepson. She was the third of five girls and after losing her mother at an early age her father remarried. Emma joined the British Air Force in 1942, becoming a leading aircraft woman. She met and married Fred Remizoff, a Canadian soldier on December 16, 1944. As a war bride she sailed from England on the ship Letitia arriving in Halifax Pier 21 on April, 1946. Travelling by train from Halifax she arrived in Brandon on May, 1946 and has resided here since.
She leaves to mourn her passing her daughter Kathryn Deis, grandchildren Carrie Sokolan (Brent) and Sean Deis (Cora Leigh) and great-granddaughters Ryland and Kaelyn Sokolan.
Emma was predeceased by her husband Fred in 1974, grandson Jeffery Deis 1971, son-in-law David Deis 2008 and sisters Marjorie, Kathleen, Dorothy and Edith Parkin and half siblings Joyce Plant, Pamela Pye and John and George Jepson, nephews Brian and Stephen Parkin.
A very special thank you to the staff and nurses on 3rd floor at Valleyview Personal Care Home.