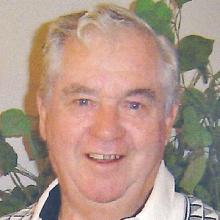 It is with great sadness we announce the passing of Donald William Gamble on November 20, 2022 at his residence Dinsdale Care Home, one day short of his 95th birthday.
Donald was born literally on the kitchen table on November 21, 1927 in Swan Lake to parents Eleanor and James Gamble. He was raised there on the family farm with his sister Norma. Donald left school at a young age to help and work on the farm. This is where he learned his strong work ethic and developed a passion for the farming community.
As a young adult he briefly moved to Winnipeg and met and married Lexie Glover in 1952. Shortly after, they moved and settled in Brandon, raising four kids and establishing a lifelong career in business. Donald’s business adventures began with working at, and soon after purchasing, a BA (Texaco) Service Station at 18th Street and College. After years of hard work in the car/truck industries, in 1961 he became the International Harvester Truck dealer and moved and formed his company, Don Gamble Ltd, on 18th Street North. This business rapidly grew, servicing the trucking industry and obtaining many different snowmobile franchises over the years such as Moto-ski, Arctic Cat, Polaris etc. In 1973, Donald amalgamated with Westman Implements to become a full Case IH dealership. Westman Equipment (WECO) provided full service and sales for both the agricultural and trucking industries for many years to follow.
During these years, Donald enjoyed a full life with family and travel, being blessed with many trips abroad. He was an avid member of the Brandon Snow Goers for years, head spearing rallies and raising money for charities and community projects. As well, many weekends were spent snowmobile racing with family and friends. Donald and Lexie enjoyed lake life, boating and fishing at their cabin at Sandy Lake. He also enjoyed hunting, curling, golfing and playing cards. In later years, he also loved family gatherings and seeing his great grandchildren very much.
Donald will be greatly missed by his son Robert; daughters Lisa (Blair) Purvis and Rhea Webb; grandchildren Jamie (Jodi), Shayne (Rachel) Rankin, Tara (Ryan) Stokes, Nicole (Rob), Taylor (Lindsay), Carter (Jannessa) and Danielle Webb; ten great-grandchildren; many nieces and nephews; and one cousin Bill Watkins of Winnipeg.
Donald was predeceased by his wife Lexie of 60 years (2012), twin daughters Dale (1953) and Deborah Rankin (2006), his parents and sister Norma Burnby.
A private Celebration of Life will be held in the spring of 2023.
Donations in memory of Donald may be made to the charity of your choice.