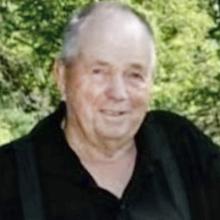 Henry, beloved husband of the late Eleanor Ball, passed away on Tuesday, December 6, 2022 at Fairview Home.
Henry was born and grew up in Brandon, marrying Eleanor Bevis in 1952. Henry started his career with Relf Plumbing, and after earning his plumbing ticket, he started his own business, Henry's Plumbing and Heating, as well as a hobby farm. In the early 1960s, he got serious into farming and bought 1200 acres and started a cow/calf operation. His plumbing business continued into the early 1970s when he bought Brandon Septic Service, which he operated for over 20 years. In the early 1980s, Henry sold the cattle, and left the land vacant until he decided to get into the Bison business and purchased 20 head. After a few years, it grew to over 100 head of Bison, and Henry continued with the Bison until he was 80 years old when he sold the majority of the herd. Henry also volunteered his time in the 1960s serving as President of the North End Community Centre for 10 years, also flooding and cleaning the ice rinks.
Henry was predeceased by his wife Eleanor two years ago. He will be lovingly remembered by sons Jim (Terry), Ron (Laurie) and Bruce (Shari), daughter Tammy (Michael), six grandchildren and six great grandchildren.
The Celebration of Henry’s Life will take place at Memories Chapel, 330 – 18th Street North, Brandon on Saturday, January 14, 2023 at 11:00 a.m.
Donations in memory of Henry may be made to the Samaritan House, 820 Pacific Avenue, Brandon, MB R7A 0J1 or the Brandon Humane Society, 2200 – 17th Street East, Brandon, MB R7A 7M6.