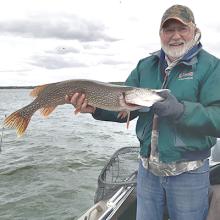 With sadness and tears the family announces the passing of our beloved husband, father, brother, and uncle on Tuesday January 3, 2023 at Brandon Regional Health Centre after a hard fought battle with heart disease and one day short of this 71st birthday.
Barry was born on January 4, 1952 in the R.M of Daly, Manitoba, the eldest of four children born to Walter and Lillian Chernos. He grew up in Rivers, MB, and in his youth excelled at sports, especially hockey, playing first locally then for the Dauphin Kings, followed by the Brandon Wheat Kings, Victoria Cougars and Flin Flon Bombers. He finished his active playing years with the Minnedosa Bombers.
Barry worked for Coca-Cola in Brandon for 44 years, officially retiring in 2017. He met and got to know so many people over those years; co-workers and customers alike. He was a people person and loved to talk to anyone.
Barry loved fishing (summer and winter), hunting, 10-pin bowling, the Winnipeg Jets and especially the Toronto Blue Jays. He always wanted to go to a Jay’s game, but it wasn’t to be. One special memory that he liked to recall was the fly-in fishing trip to the Queen Charlotte Islands (now Haida Gwaii ) to salmon fish with his old boss, David Laing and good friend, Bud Blair. We like to hope that Barry and Bud are now out fishing together again.
In his younger years, as a member of the Brandon Retriever Club, he was very successful training his Labrador retrievers for hunting and some of them for field trials as well. He was very proud of his first dog, Sam, who he trained into a field trial champion, a high point dog in Western Canada and a Canadian National Finalist in 1987.

Although Barry loved all those things, he loved his family first and foremost. He also loved his friends and he really loved life and fought hard to stay.
Barry met and fell in love with Sandra McLennan in Brandon. They married in 1979 and welcomed two children: Brett in 1984 and Courtney in 1987. He was so proud of his kids and their accomplishments. Barry loved them unconditionally and to his core. He spent so many hours and covered lots of miles in their youth, gladly attending and sharing in their activities and sporting events and hauling them around the lake to ski, kneeboard and tube with friends. The only caveat was that they had to fish with him a little in return! He will truly be missed.
Barry was predeceased by his parents Walter and Lillian. He is survived by his beloved family: wife of 43 years Sandra; son Brett and daughter Courtney (Shaun); sisters Diane (Brent) Haggarty and Bev (Vic) McDonald; brother Perry (Cheryl) Chernos; nieces, nephews and their families; and extended family.
The Come and Go Reception to Celebrate Barry’s Life will be held at the Victoria Inn – Imperial Ballroom, 3550 Victoria Avenue, Brandon on Saturday, January 21, 2023 from 1:00 p.m. – 4:00 p.m. with a time of reflection at 2:00 p.m. Please come share a memory or a story with family, and please dress casually or in camo, Barry’s favourite “colour”.
Flowers are gratefully declined. Donations in memory of Barry may be made to the Heart and Stroke Foundation, 1379 Kenaston Boulevard, Winnipeg, MB R3P 2T5; Ducks Unlimited Canada545 Conservation Drive, Brandon, MB R7A 7L8; or any charity of choice.