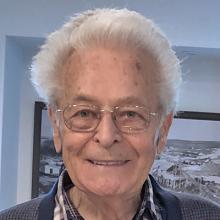 Peacefully, with his family by his side, on January 2, 2023 at the Brandon Regional Health Centre, our loving husband, father, grandfather and great grandfather went to be with Lord and Saviour.
George was born on July 28, 1931 in Lemberg, Saskatchewan on the family farm. He was the youngest of five sons born to William and Mary Konowal. In his early life, George helped his parents with the farm, as well as helping with the construction of the town Post Office. As a young man, he decided farming was not for him and in 1953, he moved to Medicine Hat where he worked in the operation of the Power House. In 1957, he moved to Brandon and worked for Manitoba Hydro as an operating engineer, and in 1968, he obtained his Power Engineer First Class Certificate. George went on to be the Assistant Station Superintendent at the Manitoba Hydro Thermal Generating Station from 1975 to 1988, at which time he retired.
George met the love of his life, Leona Harbarenko, in 1953 and they married June 26, 1955. They experienced 67 years of commitment to one another through life’s joys and sorrows. They were blessed.
Left to cherish his memory are his loving wife of 67 years, Leona; daughters Brenda (Jerry) Andre and Noreen (Randy) Nestibo, four grandchildren and nine great grandchildren; sister Marlene (Dennis) Zorn; and many cousins, nieces and nephews. He was predeceased by his infant daughter Debra, parents William and Mary and four brothers.
The Celebration of George’s Life will take place at Memories Chapel, 330 – 18th Street North, Brandon on Thursday, January 19, 2023 at 2:30 p.m.
Flowers are gratefully declined. Donations in memory of George may be made to Living Word Memorial Fund, Box 969, Swan River, MB R0L 1Z0.