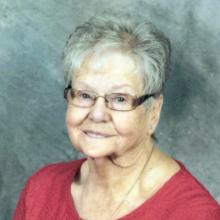 Sharon Anne Brooks (nee McKerlie) passed away peacefully at the Brandon Regional Health Centre on Wednesday, December 21, 2022, at the age of 83 years.
Sharon was born in Regina, Saskatchewan on April 20, 1939 to John and Madeline McKerlie. Sharon grew up in Regina until the age of 13 years, when her parents purchased a store in Balgonie, Saskatchewan.
Sharon married Marvin Brooks of Edmonton, Alberta, on June 24, 1961. They had three children: Kelly, Gordon and Brandi-Ann. Sharon volunteered for the Lions Club for over 34 years wherein she did attain the rank of District Governor. During her time with the Lions Club, Sharon was chairperson for the Diabetes Association and CNIB.
Sharon is survived by her children Kelly Beaudon (Maurice), Gordon Brooks (Jackie), Brandi-Ann Reigle (Falk); grandchildren Maigan Shaw (Jason), Giselle Beaudoin, Aletha Hall (Andrew), Michael Brooks and Katie Brooks; and great-grandchildren Jacob Shaw and Baby Hall. Sharon was predeceased by her husband Marvin Brooks, parents John Ernest and Madeline McKerlie, brother Brian McKerlie, sister-in-law Thelma, sister-in-law Sylvia (Don) McKay and brother-in-law Dennis (Agnes) Brooks.
The Celebration of Sharon’s Life was held on January 3, 2023 at Trinity United Church with Rev. Doug Neufeld officiating and eulogy by Ben Ward. A private interment followed the at the Brandon Cemetery where Sharon was laid to rest next to her husband in the Veterans’ Section. Honorary Bearers were Lilliss Morrice, Ruth McGregor and Peggy Stock.
Flowers are gratefully declined. Donations in memory of Sharon may be made to the Brandon Lions Club, c/o 35 Victoria Avenue East, Brandon, MB, R7A 1Y7 or the CNIB, 354 10th Street, Brandon, MB, R7A 4G1.