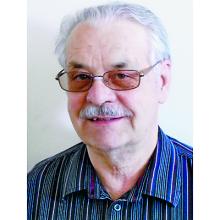 Bev grew up in East Kildonan, MB and as a teenager moved with his family to Firdale, MB. He and his family successfully farmed there until 1975. At age 39, he and his first wife Lydia (nee Wiebe) studied as undergraduates at Brandon University. He then moved his family to Coquitlam, BC from 1978 to 1981 when he received a Master’s degree in Archaeology from Simon Fraser University, later achieving his Ph.D. in 1987.

Bev returned to teach at Brandon University from 1981 to 2013. During his time there, he taught courses in Anthropology and Archaeology and researched pre-contact locations in southwestern Manitoba. Most summers he directed archeological field schools and field work. This summer research gave many students an opportunity to study in a field environment. Students also received laboratory experience, studying and identifying artifacts. The many grants Bev received provided summer employment for his students. The academic training of students was a key component of his work. Bev was a mentor to his students and many went on to take advanced degrees and are employed in academic, government, corporate and environmental assessment agencies. The grants to fund this research were from Provincial and Federal granting agencies. During his research, he received $3.4 million dollars. This research produced ninety academic papers, edited volumes, and poster sessions at scholarly conferences.

Bev was an active participant in provincial and federal associations. He was a member of the federal Social Sciences and Humanities Research Council from 1994 to 1997, the Canadian Archaeological Association Executive from 1992 to 1999 and provincial and state associations. Local and community involvement included Open House events in the laboratory and Open Houses and information sessions at the end of the field season for the local communities. Bev respected the importance of local Indigenous input and support. Local elders were consulted and the long history of the People was given respect and emphasized to the students and visitors. He also encouraged many of the students, in particular those of Indigenous ancestry, to participate in the study of archaeology and taking advanced degrees.

Bev’s family was important to him and he was the person to consult when anyone wanted assistance or just to discuss their concerns. He and his wife, Sylvia enjoyed hosting family and friends and welcomed people into their home. Bev was proud of his children and grandchildren and supported their life choices. His life was an example and inspiration for his family. As well as his parents, his sister Marjorie Hadaller was an important influence in his life. He spent many happy summers with her and her family at their farm.

The Celebration of Bev’s Life will take place at Memories Chapel, 330 – 18th Street North, Brandon on Friday, January 27, 2023 at 1:00 p.m. For those not able to attend in person, the service will be webcast from Bev’s memorial page at www.memorieschapel.com.

Gifts in memory of Bev may be made to a scholarship being established in his memory at Brandon University and may be directed to BU Foundation by mail to 270-18th Street, Brandon, MB, R7A 6A9, online at BrandonU.ca/Give, or by phone to 204-727-7374.

Expressions of sympathy may be made at www.memorieschapel.com